In 2002 the comedian Tommy Tiernan performed a standup routine in which he spoke about the events of September 11th the year previous. On September 11th 2001 almost every nation the world over was brought to a halt before their televisions and watched footage of Al-Qaeda’s coordinated attack and the subsequent collapse of the Twin Towers in what Tiernan explained to be a “Televisual spectacle before it became a human heartbreak [story].” At the beginning of 2018 the Bulletin of the Atomic Scientists announced that the Doomsday clock, the symbolic representation of how close mankind is to extinction would be moved forward 30 seconds, bringing us to two minutes to midnight, the closest we have come to annihilation since the introduction of the clock itself. This should have been a wake-up call, a turning point, a Televisual Spectacle to unite us against our own extinction. It was not. It caused not even a ripple in the international media sphere and it passed into the conglomeration of global consciousness with barely a whimper let alone a bang, to quote T.S Elliot. This essay aims to discuss how we as a species have become desensitized to doomsday predictions and inconvenient truths as well as why the Televisual Spectacle’s power has wavered in the past decade.

One could argue that the history of the Televisual Spectacle began with the relative mass inception of the television into society in 1952; the Coronation of Queen Elisabeth II. We will, for the purposes of this argument, define a Televisual Spectacle to be a single broadcast event rather than a re-televised or segmented television piece. In this vein although footage of both the Vietnam War and Northern Irish Troubles were shocking in their own time they were not on the same scale as events such as the September the 11th attacks, the funeral of Michael Jackson and, of course, the inauguration of former President Barack Obama. The 2009 inauguration could be the final impactful Televisual Spectacle of the past twenty years as in the decade past there has been little in the way of historical precedents presented in televisual form. Obama’s inaugural address is thought to have garnered over 37 million television viewers in the U.S. alone. This was indeed a turning point, a display of hope in an increasingly hopeless world; The first African American president of the United States.

Hope has little to do with the nature of the Televisual Spectacle. It is awe that is the defining point, awe that keeps an audience hooked and although this may be followed as Tommy Tiernan suggests with terror or grief or hope, awe is always the prior. An unsurpassable, unquestionable fact before our eyes. David Foster Wallace suggests that “Television screens afford access only one way…we can relax, unobserved, as we ogle.” From this we understand that the audience lower their guards, allowing what they’re watching to penetrate their defenses, to affect them emotionally, its why society rooted for Ross and Rachel, why we collectively rose to our feet and exclaimed at our screens “Did she get off the plane!?” This power television carries goes above and beyond during the spectacle.

In the last decade however with the rise of internet media, television has become less and less relevant so much so that in order to reach an audience akin to substantial many of television’s old mantel have moved partially or completely online in an attempt to infiltrate a more lucrative market. Furthermore, their attempts to challenge streaming services such as Netflix, Hulu and Youtube have reflected poorly on audience markets, one need only look at the backlash Disney faced in 2017 by pulling their property from Netflix to set up their own streaming service, and the subsequent floundering of their launch line-up (the live action remake of Mulan for instance). In addition, the media market both online, on television or in print has had raised issues of credibility especially with the emergence of “Fake News.” By coining this phrase Donald Trump put a name (however unintentionally) to an increasingly relevant phenomenon. With the oversaturation of media comes more and more differing and conflicting viewpoints and interpretations that counter and cancel one another out.

In an address during his first speaking role in The Little Dictator, Charlie Chaplin stated “[Today] we think too much and feel too little.” While this may have been true in 1940 today it is folly. Personal opinion matters more today than fact, scientific or otherwise. Previously the tactic of outright denial of events or facts has been favored primarily by radical parties, however in the last decade it has become the mainstay of the mainstream. Facts today are edited to suit personal theories and simplistic rhetoric. If questioned or challenged one merely must employ the call of Fake News to decompress and delegitimize a counter argument. We need look no further than the twice impeached POTUS for an example of this. Tiernan arguably predicted the rise of Fake News in the same stand-up routine in 2002.

In his show Tiernan discusses a choice, “a crisis” he states. To give in and be confined by the televisual rhetoric of the spectacle to indeed believe “The world is fucked!” or to choose the personal reality where on a day to day basis “everything is grand.” Tiernan chooses both and subsequently neither:

“So I knew there was…a crises and I knew I had to make a decision: which world was I going to live in? Was I going to spend my life volunteering for sorrow, watching news and getting all the bad stuff or was I going to live in my own little wrapped up world, not knowing what was going on in the rest of the world? I decided to do neither. I decided to make a compromise…I left the television on but I switched it…to the Teletubbies. Then I went out into the back-garden and I got all the children around me…and I said “The world is fucked!”

Tiernan here subverts the Televisual Spectacle by becoming the mouthpiece of it. By ignoring the spectacle and instead changing the channel to a children’s television show, in this instance the Teletubbies, he inadvertently predicts the future of our media, where personal opinion becomes the voice of the spectacle and traditional media and fact becomes childish nonsense, easy to dismiss and as easily pushed from the forefront of our minds and screens on the very basis of existing. Have doomsday predictions lost their edge? No. The threat has not diminished it has actively increased. It is merely society’s unspoken agreement to indulge personal opinion and subsequently pig-headed ignorance, our refusal to accept or face the inconvenient and frightening truth that strips our extinction of its power.

We collectively have killed the Televisual Spectacle in the same fashion. While the rise of other media and decrease in popularity of the television itself is a part of its decline it is ultimately the ability to strip a Televisual Spectacle of its power, of its awe that has led to its extinction. It is a time honored adage that there is nothing new under the sun, while this may be true the same can be said of the Internet and in an age when everything is online and, despite certain popular website’s policies, anything from sexual acts to footage of suicides can be found with little effort, awe has no place among the online billions. And so, we address the question: does it matter to live in ignorance or fear? Honestly it hardly matters. While naysayers and personal opinion advocates thrive in this society, like the heads of the Hydra of ancient Greek legend, while we remain oversaturated with information and media and news daily with different and counteractive viewpoints the clock still ticks forward regardless of our squabbling for public superiority, to quote BoJack Horseman “Time’s arrow neither stays still nor reverses. It merely marches forward.” For any argument in our civilized world, relevant or not, educated or not, can be countered and ridiculed with a cry of “Fake News!”. As merely another voice among billions of others please be content if nothing else in the knowledge that we still have the Teletubbies. 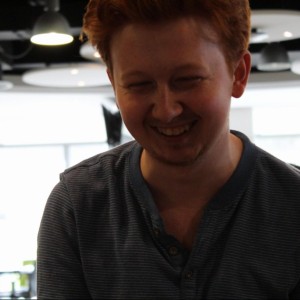 Jay Rafferty is an Irishman, an eejit and the Social Media Manager for Sage Cigarettes magazine. You can read some of his work in the Alcala Review, 3 Moon Mag, Dodging the Rain, Capsule Stories, on our website and in our journal.
All Posts