The Tradition by Jericho Brown – A Review by Maddy Templeman

Jericho Brown is the author of three collections of poetry which have won prestigious awards such as the Pulitzer Prize, the Whiting Award, the Paterson Poetry Prize and American Book Award. His poems have appeared in the New York Times, the New Yorker, the Paris Review, and Time magazine.

He is the director of the Creative Writing Program and a professor at Emory University.

His latest book, The Tradition (Copper Canyon 2019), explores diverse themes such as race, love, rape, HIV, death, loss, family, religion, good and evil. These are colossal topics but Jericho expresses them using humour and beauty without diluting the point he is making.

I can identify with many of the themes of the book as I too had a religious upbringing which pervaded our whole family life, I have been in an abusive relationship and have lost one of the people closest to me. He uses a lot of colour in his work which brings visual triggers to the brain. It felt like he was painting word pictures of how I am feeling and have not quite been able to verbalise or capture.

When reading the collection I needed to take time to savour and enjoy the words. I did not rush; allowing the flavour and texture to slowly emanate into my brain. Some of the poems had to be read several times to fully appreciate the thoughts and visions which the words had inspired. Hearing Jericho read them himself in his rich Southern American accent is a true delight and brings even more meaning to them.

Jericho is an incredibly talented writer and has surpassed himself with his invention of duplex poems. These are circular poems in two line stanzas which slightly modify the last line of the previous stanza to change the meaning and tell a story, eventually ending up back at the first line again. These poems explore some of the big questions of life including love, death and hell. I watched a reading with Jericho where he described them, “A duplex is at once a sonnet, a hustle and a blues poem” which summed them up for me.

In Book III Duplex, there are bold statements such as “Some of us don’t need hell to be good.” His powerful use of words makes me stop and reflect; I have to respond to them and cannot just let them wash over me. The last Duplex poem in the collection, Duplex: Cento brings together the lines from the other Duplex poems but with a new order and a different focus. It sums up the other poems but is a new story in its own right.

Although the poetry was published in 2019, there are many pieces which could have been written about George Floyd’s murder. The Tradition is powerful and painful to read using flower names interspersed throughout and then naming three men killed because of their race. “Where the world ends, everything cut down”. Bullet Points is a bold poem about police brutality, “I promise if you hear / Of me dead anywhere near / A cop, then that cop killed me.” The reality of having to live with the threat of this situation on a daily basis is staggering, something I can only imagine.

Consumerism and always desiring more are described in The Legend of Big and Fine. The ownership of another person being compared to the worth of a house or car is both chilling and true. Wanting the biggest and finest of everything, “Hard to imagine so many men / Waiting on each other to be / recognised.”

The themes of love and loss are explored in A.D. with the image of sleeping with two people in a single bed. The description of physical closeness and mental concern for the other person ends with “A man goes to heaven, you suffocate below the weight”. The use of the word suffocate is an apt and beautiful way to describe the overwhelming, breath-taking nature of grief.

In Garden and Gun magazine, Jericho Rising by Allison Glock, Jericho states, “As a black queer poet from the South, I think my job is to add to the story, so more of its truth can be told.” Jericho tells stories from his experience which hold truths which are relevant and significant for us all. I am looking forward to reading more of Jericho’s work and to continue appreciating his beautiful perspective of life. 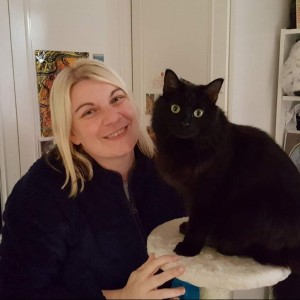 Maddy Templeman is a poet, author, musician and bid writer from Liverpool, England. She loves reading poetry, fiction and non-fiction, camping, walking, travelling, birds of prey and cats. She is an avid music lover, a blues/jazz singer and plays electric bass. Maddy is currently writing her first book which is a memoir describing the alternative Christian lifestyle she was brought up in which is very different from the world we know.
All Posts